Norwegian journalist and writer Per Aslak Ertresvåg in a pressconference today reveals that he have for awhile been an Targeted Individual, and he together with two other TI’s (Inventor Kristen Jarle Blindheim, Sykkylven and Inventor/Eng. Einar Langseth, Molde) will report crimes by PST (Police Secret Services) and Norwegian authorities for silence dissidents by means of different malicious methods:

1. Break in at his apartment. Missing papers/documents.
2. Harassment.
3. Low frequency DEW (Direct Energy Weapons), leading to heart failure for him and hospitalized him. 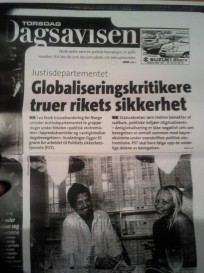 Present leader of the PST, Jørn Holme, while he was working in the Justice Department, in a newspaper article in 2003, said that critics of the globalization treathen the national security.

Ertresvåg is claiming the Norwegian Government is doing nothing to protect dissidents from such criminal behaviour by hidden forces.

Ertresvåg is the author of the books ‘Makten bak Makten’ and ‘Sov mitt lille Norge‘. He is one of the most famous critics of the globalists movement in Norway. He have a lifelong service as journalist, and have also held the position as Editor In Chief for Inter Press Service IPS.

The 7.september 2007 he announced a 9/11 Truth Group in Norway at a meeting/pressconference together with David Ray Griffin, Berit Ås og Trude Malthe Thommasen in Kristiansand, Norway.
http://www.riksavisen.no/?p=372

See his press conference below: