You are here: Home / Assassinated / In the way for NWO / Knew too much / Truth Defender / USA / Phillip Marshall

In February 2012, Philip Marshall, a veteran airline pilot, published The Big Bamboozle: 9/11 and the War on Terror, which documents the role of Saudi Arabia in running the Sept. 11, 2001 attacks on the World Trade Center and the Pentagon, and of the Bush Presidency in facilitating it by standing down. One year later, on Feb. 2, 2013, Marshall was found dead, along with his two teenage children and his dog, at his home in California.

Local police have called it a murder/suicide. But former National Security Agency officer Wayne Madsen, who spent a week at the scene investigating, says that it was a black-ops assassination, not only for what Marshall reveals in the book, but also for what he might have revealed in the future. 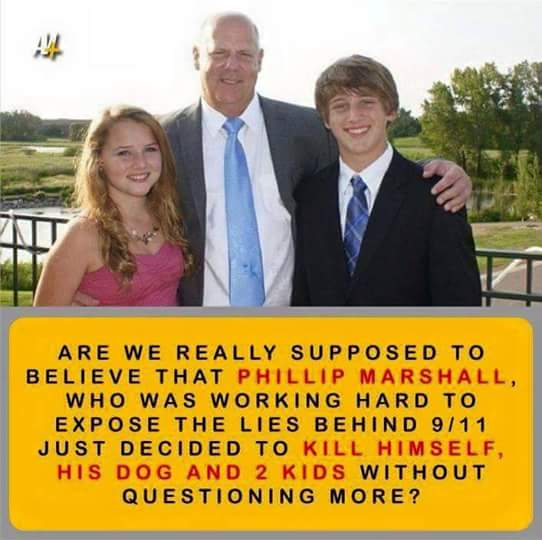 In addition to being an experienced pilot—Marshall had captain ratings on the Boeing 727, 737, 747, 757, and 767s—and was familiar with the training needed to fly such planes, and to carry out such manuevers as the 9/11 hijacker pilots did, Marshall had experience in a DEA sting operation against Colombian drug lord Pablo Escobar, and was the pilot for Barry Seal, who participated in the George H.W. Bush/Oliver North operation to arm the Contras in the 1980s.