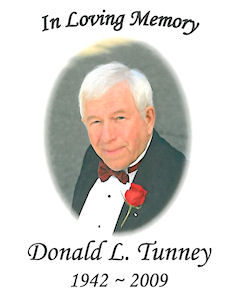 Don Tunney passed away from cancer that was either induced or triggered by dangerous radiation. In March 2008, as Don and his wife Eddie (Edna) were returning home from Mexico in their RV motor home, they met a roadblock that was stopping vehicles for inspection about 200 miles south of the border. Don was directed to drive their RV next to a mobile X-ray scanner with a large rectangular arm. The gamma radiation from this scanner, which is powerful enough to penetrate RVs, semi trailers and shipping containers, is also lethal to living beings! No one is supposed to be inside the vehicle during scanning. But the Mexican authorities not only failed to use the equipment properly, they also failed to advise Don and Eddie to leave their vehicle. Don, who drove through the apparatus and was closest to the radiation source, could feel his chest tingle. (Eddie on the passenger side only felt the beam in her ears.) Don never felt right after that experience. Less than two months later, he developed a very aggressive cancer.

Holistic practitioners know that cancer is a very complex disease with multiple causes possibly unique to each individual. In addition to its viral (and/or fungal) component, cancer can be caused or exacerbated by chemicals, injuries, lifestyle, radiation and mercury toxicity. In Donâ€™s case, his immune response was likely weakened by a bout of pneumonia just prior to his exposure to the gamma rays. Also, mercury may have played a role, as several years earlier he had all his mercury fillings removed at once, which may also have contributed to a stroke and subsequently weakened his system further.

Despite the many insults to his system, Donâ€™s life was extendedâ€”and the quality of his life was vastly improvedâ€”through the use of not only the PERL device, but numerous holistic modalities. (In fact, Don did not require any pain medication until his last two days.) Donâ€™s loving wife, Eddie, talked about just a few of these therapies and the scope of her husbandâ€™s healing.

‘Don radically changed his diet. He cut out sugars and carbohydrates, and drank fresh vegetable juices daily. He was very disciplined, and so missed the happy hour margaritas. During his palliative care, the hospice nurses and homecare workers were amazed at the glowing condition of his skin, his sense of humor, and ability to direct some of his care decisions with such mental clarity. They had never met anyone dying of cancer who on other levels was in such good shape. Every day, I ran a variety of maintenance frequencies for staph and general healthâ€”always keeping in mind the detoxification effects. I know that the device contributed immensely to his emotional and spiritual healing. Healing has to take place on all levelsâ€”physical, mental, emotional and spiritual. We are all still grieving’and the triggers of his absence are heart wrenching for me. I want to extend my gratitude to the Rife Forum community for expressing their compassion and understanding. I also want people to know that Don and I were both satisfied that we did all we could for him, overwhelming as it was at times, and that what we did helped. If anything, I wish we had more time to have dealt with some of the unforeseen issues. Nonetheless, Donâ€™s passing was complete. No one can ask for more than that.’

Everyone in the Rife community will miss Don. His dedication and drive helped advance the future of frequency therapies. We extend our support and love to Eddie Tunney, to Donâ€™s children, and to the entire staff at Resonant Light Technology.

***
According to New World Order agentur they like the worlds population reduced by 2/3, so they dont like so very much people who cure other peoples from what the agentur have induced by vaccines, fluoridation, mercury poisoning, etc. – to achive this goal. People of such a good heart have to be ‘exterminated’.