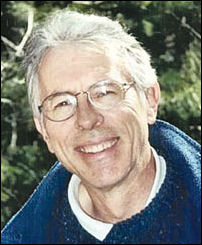 In 1994, Kevin MacDonald’s writes his first book in what became his trilogy. It was titled ‘ A People that Shall Dwell Alone: An Evolutionary Theory of Judaism’.

“There have been times when I have had to endure vicious charges of anti-Semitism”
[ ]
“But then came the SPLC and Heidi Beirich. Someone not connected to CSULB sent an email to the entire Psychology Departmentâ€”except meâ€”asking why they allowed an ‘anti-Semite’ to teach there. The result was an uproar, with heated exchanges on the faculty email list, a departmental meeting on what to do about me and my work, and intense meetings of the departmental governing committee.Â  “
http://www.vdare.com/macdonald/061114_splc.htm

Jewish pressgroups even try to get him out of his job. DDN dont know if they succeded or not.

Kevin MacDonald, author and Professor of Psychology at Cal State University, Long Beach (CSULB), faces censure and stigma on the very campus where he teaches.Â  His crime?Â  Publishing scholarly books which explore expressions of Jewish ethnocentrism and modes of Jewish deception throughout history.Â  Most contentious is his monumental work “The Culture of Critique”.

MacDonald is under siege on numerous fronts by an interconnected array of Jewish-lead organizations.Â  These attacks are a back door assault on intellectual freedom.Â  One of the major players in this war on Free Speech is a self-declared ‘civil right’s’ organization calling itself the Southern Poverty Law Center (SPLC).Â  This heavily-funded, highly-positioned and crypto-Jewish watchdog group receives extensive TV exposure and labels MacDonald’s scholarship “anti-Semitic” and “neo-Nazi”.Â  These tendentious mischaracterizations enable Jewish activists within the SPLC to hide their identity (and ethnic-based motives) while they marginalize dissident scholars like MacDonald and intimidate others from speaking out in his defense.Â  At least one imperious agent of the SPLC paid CSULB a highly-publicized visit some 15 months ago in an ostentatious attempt to undermine MacDonald’s reputation there and spread the usual high doses of fear and intimidation for which Jews are now famous.

Now, a coalition of of CSULB faculty (mostly Jewish) are moving to formally repudiate MacDonald by threatening to issue a politicized edict dissociating CSULB’s Psychology Dept. from MacDonald’s independent scholarship.Â  This is nothing less than a modern day ‘inquisition’–and it’s taking place in an American university!Â  These despicable attacks on a courageous scholar are a stunning rejection of the cherished value of intellectual freedom.Â  In a previous era, this level of arrogance might embarrass even the most ethnocentric Jew, but the exalted status of Jews-as-victims now affords this group unique privileges to which members have become addicted.Â  Yes, power corrupts.

But why should the University play such a censorious and punitive role?Â  After all, this is 21st century America.Â  MacDonald is a tenured professor behaving lawfully and writing brilliantly.Â  Further, his position at CSULB is little more than a footnote to his career as a critical expert on Judaism.Â  Indeed, it’s these Jewish censors who are using the university system to improperly subvert a colleague’s constitutional right of Free Speech.Â  In a nutshell, the purpose behind this kosher inquisition is to protect the supreme status of world Jewry.

The multi-faceted assault on MacDonald’s position as a tenured professor is a chilling reminder of the level of Jewish excess and Jewish tenacity Americans are now facing.Â  This is especially irksome when one considers that MacDonald’s extraordinary thesis has never been successfully refuted by his critics.Â  In fact, this totalitarian mindset behind the anti-MacDonald campaign only confirms MacDonald’s provocative paradigm.Â  Thus, the familiar strategy now used by these Jewish supremacists is to attack the messenger when ‘attacking the message’ fails.Â  This past week, the escalating war against Prof. MacDonald has been playing out via the Cal State newspaper on the campus where he teaches.

Helping the SPLC along in its smear campaign is an ad hoc lynch mob lead by a handful of Jewish professors though, in typical fashion, they’re not identified in the newspaper as Jews.Â  This serves them well since their self-serving motives remain hidden as they “fight anti-Semitism” (i.e., suppress unfavorable information about Jewish behavior).Â  In his writings, MacDonald has identified this stealth strategy as a familiar tactic used by Jews to quietly advance their ‘group interests’.

Contrary to the misleading innuendo and provocative headlines, the true source of this brouhaha is Prof. MacDonald’s groundbreaking trilogy of books on Judaism and his rising stature among committed anti-Zionists as well as rank and file Americans.Â  MacDonald’s books are original, scholarly and deep.Â  But what riles Big Jewry is MacDonald’s willingness to break the unwritten rule:Â  all criticism of “the Jews” (especially by non-Jews) must be cautious, respectful and, if necessary, apologetic.Â  Better yet, just say nice things.

But MacDonald’s analyses are so compelling (and explosive) that the tactics employed by his adversaries are becoming ruthless.Â  One familiar avenue his adversaries are exploring now is how best to sabotage his reputation as a scholar.Â  Thus, MacDonald is continuously “linked” to in news stories (rumors) involving to “neo-Nazis” and “white supremacists” while other Jewish activists simultaneously question his “scholarship and methodology”.Â  This shifts the discussion away from MacDonald’s extraordinary findings and towards his now-suspect character and motives.

As these tricks are played out, the geniuses in Hollywood explore ‘free speech’ issues through films which exalt pornographers like Larry Flynt.Â  All the while, true intellectual heroes like Kevin MacDonald are either vilified or ignored.Â  At the same time, Free Speech zealots in the ACLU just happen to overlook cases like this where Jewish privilege might be threatened.Â  Doubtless, these idealistic ACLU lawyers would rather be protecting ‘lawful assembly rights’ at a San Francisco pedophile conference or providing free legal services for ‘undocumented immigrants’ than aiding an heroic intellectual if there’s a politicized charge of “anti-Semitism” in the air.Â  The result: Prof. MacDonald is left alone to combat the ruthless maneuvers of the world’s most powerful ethnic lobby.

Ultimately, whether one agrees or not with MacDonald’s conclusions about Jews is irrelevant.Â  His right to speak and publish should be, must be, protected entirely from academic or ‘civil rights’ hit squads.